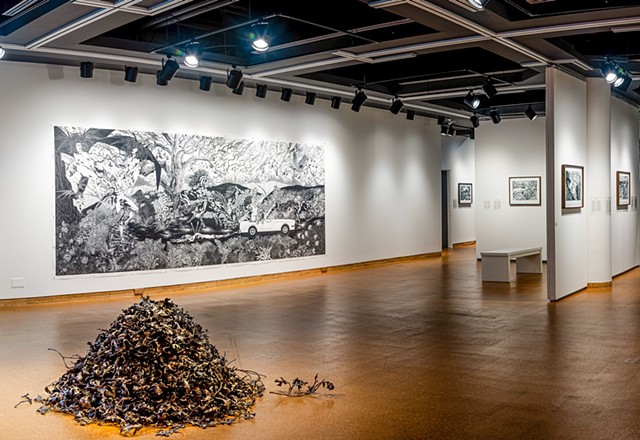 The Revenge of Persephone (Detail)

The Revenge of Persephone

In Greek mythology mothers are predominantly represented as either passive victims or malevolent destroyers. Buffeted by the male forces in their lives, mothers exist as victims via rape, betrayal and a complete lack of control over their or their children’s (especially female children’s) fate. Any perceived strength or power derived from motherhood was considered to be a destructive force. This representation operated as a warning to the entire citizenry of the chaos that autonomous female power could incite to lineage, order, civilization and ultimately to themselves, and thereby served to support patriarchal authority in Ancient Greece.

Without consultation or consent, Zeus gave his and Demeter’s daughter, Persephone, to Hades in marriage. Stricken, Demeter searches for her lost child. Hearing her desperate cries, Hecate and Helios alone hear her desperate cries and come to her aid, informing Demeter of her daughter’s abduction and rape. Wild in her grief Demeter, scorches the crops of earth, and thus threatens the survival of humanity. Zeus selfishly realizes that if humanity were to perish there would be no one left to honour him with offerings, so he relents and forces Hades to return Persephone to Demeter and the land of the living. As Persephone emerges from the Underworld, Ascaphalus tells Zeus that Persephone ate seeds from a pomegranate while in the Underworld and is therefore forever bound for a portion of the year to the realm of the dead. Demeter acquiesces, agreeing that Persephone will spend half the year with her and half with Hades. Demeter purges her fury on Ascaphalus and turns him into an owl.

In my retelling of the myth, Demeter and Persephone escape from the Underworld in a Thelma and Louise style flight with Hades corpse dragging from the rear bumper of their car. Here I am drawing a parallel between the wrath of Demeter to that of Achilles as he dragged Hector’s body three times around the walls of Troy. Achilles’s brutal actions to avenge the death of his beloved Patroclus are often held as the epitome of heroism. Here I offer Demeter and Persephone agency and action as they rise as the heroines of their narratives. Pomegranate aloft, Persephone’s war cry rises above the rev of the car engine as Demeter sets her sights on a fleeing Ascaphalus. Left in their wake, Zeus contends with the consequences of his predatory patriarchal actions. The Erinyes –Tisiphone, Megaera and Alecto – the inexorable pursuers of sinners and ministers of justice join with a vengeful Callisto, in her form as a bear, to tear Zeus apart.