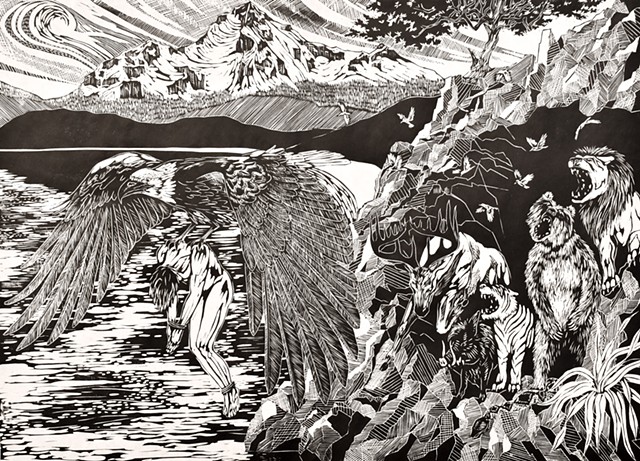 In exchange for his freedom from tormented shackles, Prometheus shares a prophecy with Zeus: “Thetis’s womb will bear a boy who will grow to be greater than his father. Shining Achilles will spring from Thetis to make the Scamander run red and steep the walls of Troy with blood”. Zeus, already aware of Thetis’ maiden beauty and knowing his inability to restrain his lust, sends Peleus to rape her and sow a baby in her womb, so as to have the prophecy fall upon another. Thetis is no mortal woman but one quite divine, and shifts shape from winged wren to raging bear as Peleus tries to mount her. Cast from Thetis’ hallowed grotto, Peleus tries to shirk the gods decree. Zeus rises in wrath and demands Peleus return to the cave while Thetis sleeps and bind her tight until the field is ploughed and the seed sown. In my retelling of this myth, Thetis outwits and outmaneuvers, shifting forms from lion to spider to slip the thongs Peleus has cinched upon her limbs, and rises up a ferocious lion. Justice lands a devastating blow, and with the finality of axe to trunk, Peleus is felled. Thetis grabs the wasted mass in her claws and changes form for the task ahead. She hefts the weight beneath her wings and lifts him up as she flies out over the bay beyond the mottled blue of reefs and breakers. Far from sight of land and company of gull, she eases her grip and lets him fall.