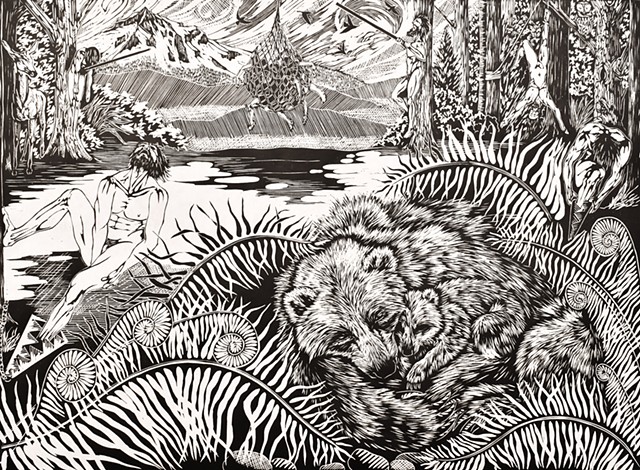 Zeus glimpses fair Callisto, one of Artemis’ chaste and brave huntresses, and burns with desire. He waits for his wife Hera’s back to turn before stealing away from Olympus to rape her. Hera learns of his criminal deed as Calisto’s belly grows with Zeus’ offspring and Arcas is born. Furious, she turns Callisto into a bear. Callisto flees across the mountains in terror of the beast she has become and the wilderness she now can’t escape. The howling dogs of hunters split the night and feral growls break the shadowed silence. Running night and day, she exists in a state of protracted agony for untold years. To Hera’s glee, decades later Callisto flees yet again from the regular pursuit of hunters, however this hunting party includes young Arcas. Unaware of the maternal nature of his prey, Arcas launches a javelin at the rearing bear. A pang of guilt penetrates Zeus and causes him to lean over and flick the javelin wide. As the bronze sings smartly by, Zeus turns mother and child into stars and sets them in the sky above. Unable to withstand this honour of her rival, Hera flies to Oceanus and bars these newly minted stars from ever falling to the sea and resting below the horizon. In my retelling of this myth, Callisto embraces her animal nature as she sheds the shackles of her human form and finds femininity is more potent when it is wilder. Turning the hunters’ traps on them, their desperate screams are consumed by loam and leaf as she and Arcas rest peacefully in their forest home. It is better to be the hunter than the prey.