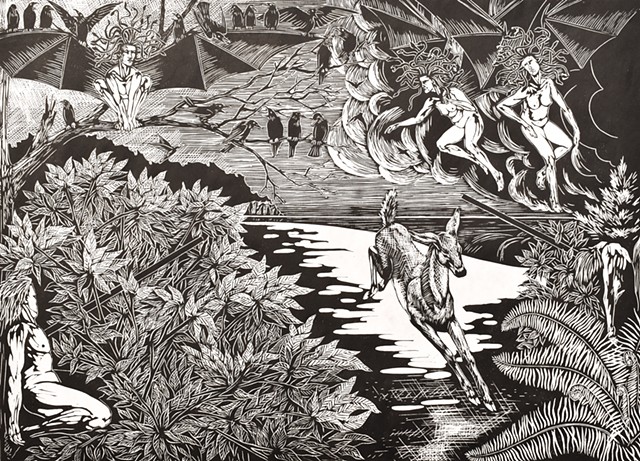 Twin brothers, Otus and Ephialtes, strain to pile mountain upon mountain to scale the vaulted roof of Heaven and usurp Zeus from his lofty reign. Anguished by his sons’ foolish mission, Poseidon urges them to find entertainment elsewhere. The brother’s attention is soon caught by other prizes – one becomes infatuated with Hera’s fair form, while the other is feverish for the huntress Artemis. Lots are drawn and the stones are cast: Artemis will be the first they catch. The virgin Goddess will be so no longer – like hounds on a hare they pursue her. Feet pound black earth, bows break as the brothers assault a resisting forest in a frenzied chase of their bolting prey. Wild with flight, flushed and glowing, the brothers marvel at their prey, made more beautiful for the chase. Crazed with lust, the twins blindly step into her baited snare. As Artemis darts ahead out of view, hooves replace her hands, and a soft muzzle where her lips had been. A blonde hind steps into a clearing.

Breath catches and blood pools as the brothers are consumed with a new hunger. Practiced hunters, they split and flank, aim and launch. From either side of the glade the sing of spears cleaves the silence. Artemis leaps. Reflected horror glints on their polished blades. A mirrored death – life streams from their limbs turning earth to mud. A blood price paid. In my retelling of this myth, iron on the evening breeze beckons demon Furies from below, winged shadows of torment turn a darkening sky black. The brother’s bodies are left unburned and unburied. No dirge will rise above the spires of the pines. Otus and Ephialtes, twin souls condemned to agony for a lascivious plot conceived.